Originally, the Pughs pursued other owners of existing yogurt shops in an effort to convince them to open a location in Gallipolis. When that proved unsuccessful, Robbie and Tessa, who also own Silver Screen VII and Rocket VII, decided to move forward with opening the business themselves, with a little twist.

“We didn’t want to just have yogurt and that be the end of it. I feel like yogurt shops in general struggle in the off-season months because of their limited options for their customers,” Robbie Pugh said. “So, our idea was to incorporate cake pops, coffee, popcorn, some different options for the customers to help offset the slow time.”

Choosing a location for the new shop was not easy, according to Pugh. Due to the number of events that take place in Gallipolis City Park, they knew opening the shop downtown would be beneficial. The existing buildings, however, did not have the electrical capacity to handle the needs of a yogurt and gourmet popcorn shop. Fortunately, a new building being constructed by Randy Breech and Jim Blair did offer that option. Between the new building and support from the Downtown Revitalization Project, Pip & Hud’s opened its doors on April 2, 2015, and has been going strong ever since.

“It’s been a bigger project and a lot busier than we ever would have thought, which is a good problem to have,” Pugh said.

One thing the Pughs have always been adamant about is the recognition of the importance of their staff.

When they first opened, they initially planned to not hire additional employees and, instead, give their current employees more opportunities at both the cinema and the frozen yogurt shop.

“A lot of our employees work both places and they obviously do a great job. I wouldn’t know what to do without them,” Pugh said.

As business at the frozen yogurt shop grew, it became apparent, however, they would need more help. After just one week, the Pughs added four more employees to help with the load.

Pip & Hud’s, named after the Pughs’ children, Piper and Hudson, offers a variety of products, including self-serve frozen yogurt, gourmet popcorn made on site, smoothies, milkshakes, cake pops from Dixie Walker Cakes and coffee products utilizing Silver Bridge Coffee. At their ribbon cutting and grand opening, they unveiled their gourmet popcorn tins now on sale. One of the tins features a landscape wrap of Gallipolis City Park. In addition, the Pughs announced the expansion of Pip & Hud’s to include a party room, which will be opening soon.

For more information about Pip & Hud’s, follow them on Facebook or visit www.pipandhuds.com. They are located in downtown Gallipolis on Second Avenue across from Gallipolis City Park.

Michelle Miller is executive director of the Gallia County Chamber of Commerce. 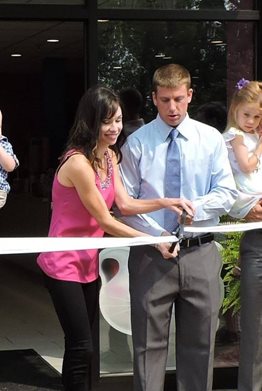