Delta Airport Consultants Project Manager Steve Potoczak flew into the airport around noon to discuss the closing formalities of the project that began in late September and finished in November. Trevor Small, representing Shelly Co. who build the new runway, was present, as well as Gallia County Commissioners and Gallia County Administrator Karen Sprague.

The project was anticipated to cost around $1.2 million. A grant from the Federal Aviation Administration and U.S. Department of Transportation was awarded to the airport. The county provided a roughly $120,000 match in funding while the rest of the project was funded by the grant.

According to Potoczak, construction actually spent on the project came in at about $100,000 under the projected $1.2 million cost.

County officials discussed the remainder of project formalities with Potoczak. All seemed satisfactory, save for some slight pooling of water at the opposite end of the runway where aircraft enter the field. The problem should be corrected in a short period of time.

According to Commission Vice President David Smith, when the Silver Bridge collapsed across the Ohio River in 1967, then-Ohio Gov. James Rhodes flew into the Gallia-Meigs Regional Airport.

“The bridge fell up here in December of ‘67, ” said Smith. “Gov. Rhodes flew into this airport that night. That was one of the first official uses of this airport.”

Asphalt was milled on the runway in October as well as the application of 3 inches of asphalt. A quarter-of-an-inch deep series of grooves was cut along the entire length of the runway to help with water displacement which would aid in preventing hydroplaning when aircraft land or take off.

Pilots have been known to commonly use the regional airport as a refueling point between destinations. It is measured at roughly 3,999 feet long and 75 feet wide.

“I’ve known some of the local (industrial) plants to fly product in and out occasionally,” Commissioner Harold Montgomery stated earlier in the year. “Some people may view it as just a recreational area (the airport), but it is an important tool in our (Gallia-Meigs) economic development. 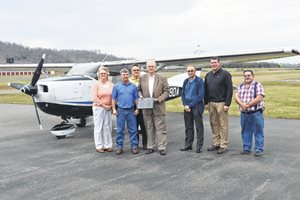