A delegation of nearly 40 Gallia County elected officials, business leaders and community members traveled to Columbus on Friday, September 12, to meet with key State department personnel during a Gallia County Legislative Day at the Ohio Statehouse.

“It’s always great to host constituents at the Statehouse and help facilitate discussions with various Government agencies. It also helps me make the case to garner the necessary resources to reach our goals,” said Representative Smith.

A few of the highlights from the trip include a discussion with Governor’s Office of Appalachia Deputy Director Joy Padgett regarding the current state of the economy in Ohio and efforts being made throughout the region in terms of economic development.

“I think we all know small business is the foundation of economic development. If you wanted to look at one single sector of the largest employer of the nation, it would be the aggregate of small business. That is the absolute center of the economy in the United States and in Ohio,” said Padgett. “I hope you are feeling this in Gallia County. It’s very slow. This recovery has been an incredibly slow recovery, but Ohio’s economy is doing better every day.”

Padgett gave attendees an overview of the progress made thus far in strengthening Ohio’s economy, citing the now healthier budget and better unemployment rates, as proof it is on the mend.

“There was some pretty serious belt tightening. There’s still some complaining going on, but the State is now in its fourth year of a budget surplus and that’s important to everybody. We went from being very heavy in debt to the strongest economy of all the States today. That’s a big turnaround in a short period of time. It does make a difference down in Gallia County,” said Padgett.

Padgett also made a case for the importance of tourism to a local economy, calling it a quiet, economic booster for everyone.

“My advice to every county, whatever you can do to encourage tourism, is just an unbelievable return on investment.”

When asked what the State is doing to attract businesses to the region, Padgett discussed the newly formed Appalachian Partnership for Economic Growth and how it will assist in developing the region.

“We focus on both retention and expansion, as well as attraction for projects. It’s a common piece of information within the economic development world, that about 80 percent of new jobs are created through existing companies,” said Cybulski, who went on to explain many companies are now consolidating and evaluating their footprints, making new projects more difficult to obtain. Cybulski said, one of the key factors to ensure an area is competitive is having its economic development information ready at a moment’s notice.

“The speed in which that information can be submitted to companies is very important, because typically, they provide us very little lead time when they’re looking for properties. When that information is packaged in a very concise, complete manner, that helps put those areas on the map,“ said Cybulski. When asked if the State has seen an upward trend in companies moving back to Ohio from overseas, Cybulski said yes.

Director Orman Hall of the Ohio Department of Mental Health and Addictions Services also spent time with the group to discuss the prescription opiate and heroin epidemic throughout the region.

Hall said the State has made great strides in reducing the amount of prescription opiates used throughout the region, though there is still a lot of work to be done. Hall discussed solutions to continue battling the issue.

“Clearly, from my perspective, in terms of this particular epidemic, the over prescribing of prescription opiates is the most important thing we need to deal with in order for our communities to see progress,” said Hall. Hall discussed current guidelines that have been issued to the medical community when prescribing opiates.

“At this point they are just guidelines, expectations, but our Governor has said, if we don’t see significant progress in terms of change of prescribing patterns, those guidelines will become rule,” said Hall.

When asked if there have been studies on how much of an effect the crackdown on prescription opiates has had on the rise in heroin use, Hall commented, while there are no specific studies, there is plenty of data that would suggest the two are related to a degree.

“If you look at the data, what we’re seeing, from an overdose standpoint and from the standpoint of treatment admissions, we are seeing an increase in heroin admissions and heroin related overdoses. I think there are a number of people hypothesizing it is, to some degree, related to prescription opiates becoming less available. There may be some truth to that, but I don’t think the solution, is not tightening up on prescription opiates. It’s making sure treatment is available,” said Hall.

The discussion was turned over to Gallia County Sheriff Joe Browning for his comments regarding heroin in Gallia County.

“When you are talking about economics and crimes in your community, the most expensive inmate to house, is someone who is heroin addicted. What we are seeing now, just about every inmate we get in, up to 99 percent, we have to handle them medically to ensure they are being housed properly within the facilities,” said Browning. “It’s a very expensive problem. There’s no easy fix to it. I have to agree with Attorney General DeWine. You’re not going to arrest your way out of the problem. I think it’s got to be a multi-tiered approach. It’s prevalent right now. It’s one of the major factors, if I was someone who owned a business and was looking at locating in Southeastern Ohio, I’d have to think about the workforce I was drawing from to staff that business. It affects it all across the board.”

“Overall, the trip appeared to be a great success,” said Community Improvement Corporation President Tammi Brabham. “The goal was to allow local leaders the opportunity to discuss important issues in Gallia County with State leaders and make a presence in Columbus.”

Holzer Health System Chairman of the Board Brent Saunders said, “The trip to the Ohio Statehouse provided an excellent forum for the citizens of Gallia County to inform various leaders of our concerns and needs. It also allowed us to promote the assets we have in Southeast Ohio.”

Gallia County Economic Development Director Melissa Clark said, “This trip provided an excellent opportunity for our community to further engage with State officials regarding a variety of topics, including economic development and further growth opportunities. The strong advocacy and support provided by Representative Ryan Smith to our community is immeasurable.”

Gallia County Commissioner Harold Montgomery said, “It was great traveling together as a community with one common goal, the betterment of Gallipolis and Gallia County.”

Another trip is planned in the future, based on the feedback received from those in attendance.

Michelle Miller is the Executive Director of the Gallia County Chamber of Commerce.

For more information on the Chamber of Commerce, visit www.galliacounty.org. 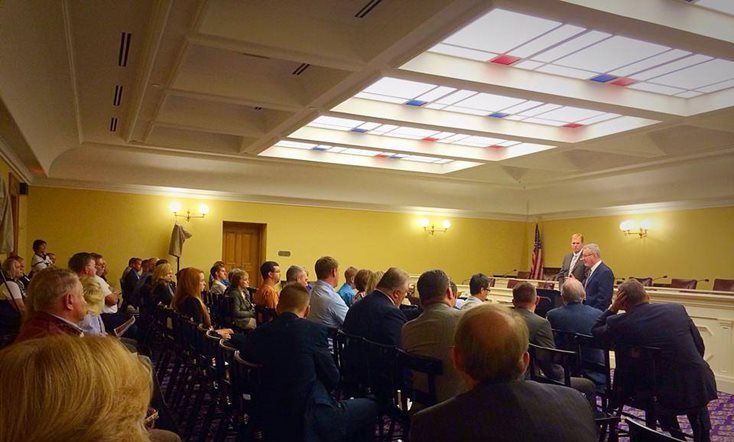