GALLIPOLIS — Ohio Valley Bank is in the process of restoring its old office location at the corner of Second Avenue and State Street.

According to Bryna Butler, Ohio Valley Bank’s vice president of corporate communications, the old bank office was originally constructed during the mid-1890s and opened in 1896 after the bank grew out of its office location on the second floor of 312 Second Ave.

Originally, just the front three stories were used in the company’s operation and then a few years later the second edition with two stories was added. Alfred Henking was the first president of OVB. The bank was originally established in 1872. The bank continued to operate in its old location before moving to its location at 420 Third Ave. after building a new structure in 1961. It then sold the old location.

“The president of the bank at the time wanted to make sure they (the bank) made a statement at the time,” Butler said. “It was the tallest building in the county when it was built, and it has Swiss architecture on its top.”

OVB is applying with state government to receive historical tax credits to aid in the rehabilitation of the location.

“One of the neat things about that building was that Bob Evans Farms actually started (its office) in the second floor of the bank building,” Butler said. “Emerson Evans was actually president of the bank at the time and Bob wanted to start a business. He came to Emerson because Emerson was known as a wise businessman in the family to get some advice. Emerson wanted to keep him close so they started Bob Evans Farms there on the second floor. That would have been in the ’50s.”

According to Butler, the bank had discussed acquiring the location for some time.

“We plan to restore (the building) and make office space. We’re looking at making a public community room on the third floor. It’s a big wide, open space and it feels like a shame to close it in,” Butler said. “It would be a room that the community could use to hold banquets, showers or meetings … whatever would be needed.”

Butler said an elevator is also anticipated to be added to the building as it has never had one before.

Frank Packard served as architect for the structure. He was also said to have designed the Ariel Theater and a porch for President Warren Harding in Marion, Ohio.

Before its return to OVB hands, the building served as host to a hardware store, pharmacy, tin shop and a variety of other businesses.

“I did want to mention that the Downtown Revitalization Project has been instrumental in this project. Not only have they been an inspiration with all the work they are doing with the downtown area, but DRP’s members have assisted us with locating grants and conducting historic research which has been the cornerstone of this project,” Butler said.

Butler said that OVB’s mission has always been “community first.” 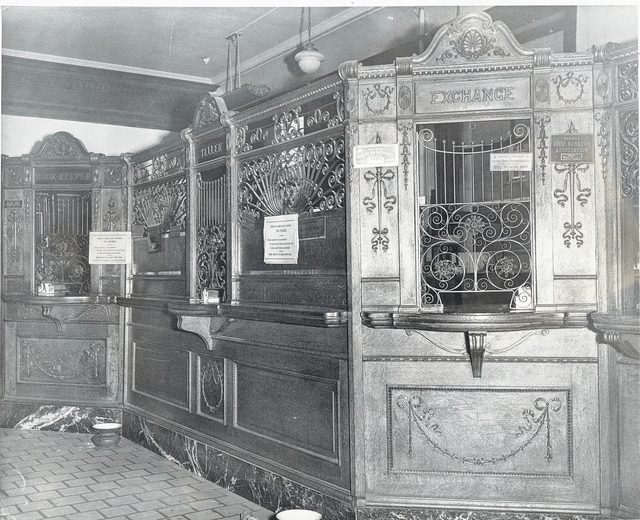